The Luzerne County digital and law-enforcement encrypted public safety radio system is poised to go live on September 28 and I, or, I as WBRAIL, remain intensely focused on this issue for a number of reasons.

First, I was among the first to pick up and loudly run with the controversy of encrypted public safety radio systems way back in the 90s, long before it was "cool" (for lack of a better word) for the topic to bubble up elsewhere, as it would inevitably have to.  The media and even local police department coverage of the Luzerne County conversion is a complete manifest of all my concerns and solutions, reincarnated in 2022.

But that's not the only reason since, after all, since then lots of municipalities have gone on to encrypt their communications, or gone in the opposite direction and kept them open.  What makes this particular transition special to me is that Luzerne County is my birthplace, and so, naturally, I find it somewhat poetic that the county would embroil itself in the questions I put out there ages ago.  I feel bound to the controversy as it exists in my native locality. 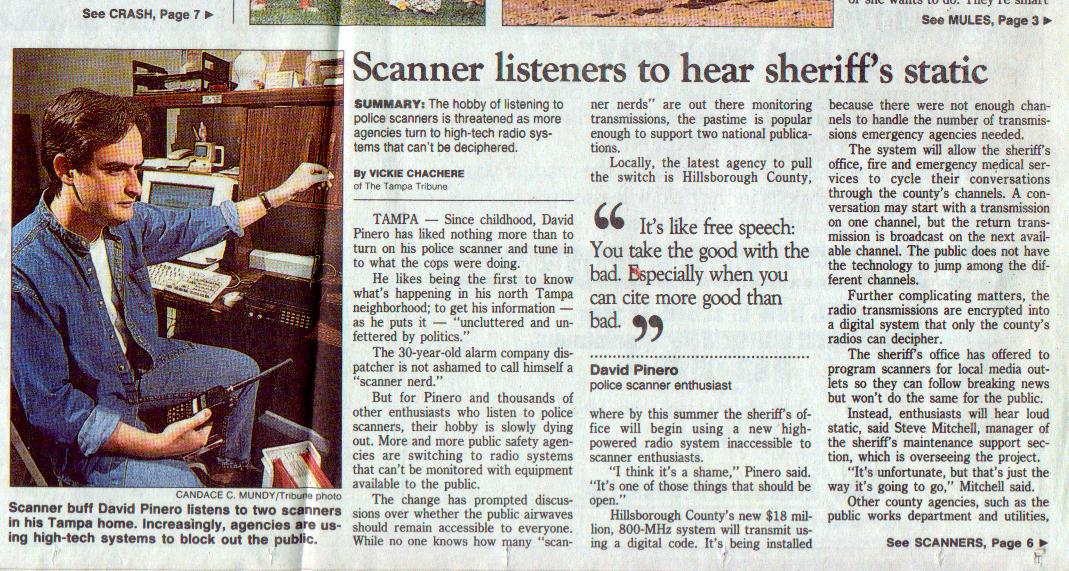 Too, is the apparent veracity of people in Luzerne County actually listening to police scanners.   People in and around Wilkes-Barre have police scanners sitting atop their fridges running non-stop.   Knowing what the police are doing is a culture in and of itself in Luzerne County and it is deeply synthesized. With the mushroom event of social media over the past 15 years, they were quick to integrate what they heard with Facebook Groups, as a leading example.

More than any other place I have experience with as "master of the cause" so to speak, Luzerne County stands out as particularly sensitive to the debate.

Their public relation strategy seems to well acknowledge this sensitivity as is evident with their exceptional outreach ahead of the transistion.  While in actuality a rather obscure subject matter, Luzerne County took the time, registered a domain, and set up a web site.

In particular the Wilkes-Barre Township Police Department (not to be confused with Wilkes-Barre City proper) has become the populist de-facto public guide in the matter, taking the extraordinary, and I would add absolutely refreshing, step of actually polling the public via its Facebook Group about what type of outcome people would most appreciate, with regards to a compromise solution. 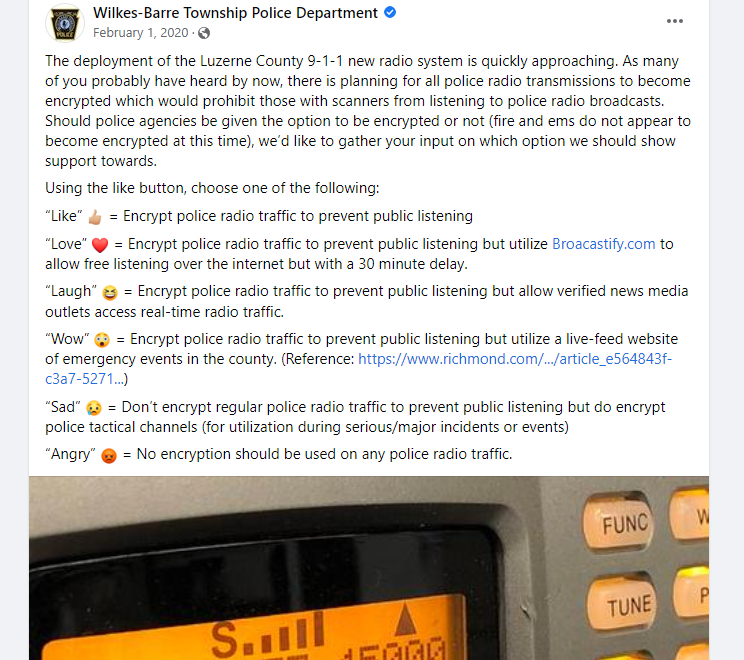 The Wilkes-Barre Township Police waded, positively, into the question of best way to use encryption but keep a public presence.

Their poll showed that people were actually quite reasonable in accepting the compromise of generally open broadcasts with only those channels involving undercover or tactical actions actually encrypted. 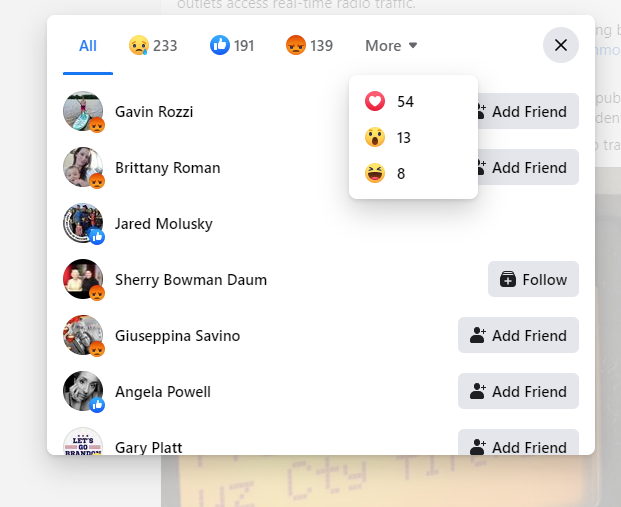 Most responders indicated, as depicted by the tabulated "crying face" icon,  agreed with some encryption, but generally open broadcasts otherwise.

Notably, the least popular course of action was to engage in some sort of "official assessment" of "verified news media outlets", and give just them access.  Which is to be expected in an era when people are driven to escape mainstream media's focus and narrative in all issues.  Rely on the Times Leader for my news?  No way.  (Sorry to use them as an example, I am still bristling over their capricious censorship.)

In between those two extremes were a number of mitigating ideas which were interesting and demonstrative of an impulse to adopt the new level of control while still feeding Luzerne County's appetite for real-time news.

What ultimately won out, though, was complete encryption of all law enforcement channels.  Whether for financial, logistical, or public-appeasing reasons (maybe all of the above), medical and fire broadcasts would remain open.  This was not a poll option in Wilkes-Barre Township Police's ask, but in my experience over these decades I find that this is the place many municipalities land naturally.

It's probably worth pointing out that previous reporting on this deployment has alluded that utilizing encryption would be optional among the 48 various police agencies within Luzerne County.  Most current reporting whether by factual point or by lack of attention to nuance, seems to suggest that all of them are opting for it.

In my ideal preference nothing is encrypted except what reasonably must be.  So, in the poll, I went with the majority.  It's an approach that has always been within the scope of my campaign's philosophy.  It's law enforcement after all and how could law enforcement even function if everything they said was "open".  Few of us could do our own jobs under that kind of broad transparency.

My biggest suspicion however goes back to that thing about police giving access to "verified news outlets".  Despite the overt public stand that Luzerne County law enforcement might be encrypted, and that private citizens will not be allowed to listen in, it will be interesting over time to see if cracks develop and access to encrypted broadcasts to commercial media houses begin to leak.

Will there really be a Times Leader sphere where no radio capable of listening to the encrypted radio traffic exists in the newsroom?  Or perhaps squirrled away in the glove compartment of some random reporter's car?

The Times Leaders of the world are really going to try and crack that policy for them.  And the reason they will do that is because they have lost value ever since the Internet and, worse, social media, became actual things.   The newspaper industry has completely imploded in my lifetime because it lost its grip on both exclusive access to content, and the conduits of conversation.

Remember, the people of Luzerne County bound police scanning and Facebook Groups together, creating an entirely chaotic ecosystem of news and views that left the Times Leader and other news houses "standing aside", irrelevant and kind of obnoxious in their own presumptive role.  And since advertisers are only willing to pay for where the attention flows, this means they pay places like Facebook and Twitter, not them.

A decision by county law enforcement to encrypt sets up a situation where the Times Leader can once again beat all the dynamics of free media and re-commodify itself if it can somehow make itself the exception to the rule.

Exclusive access to encrypted Luzerne County communications would restore their advantage to both news gathering and story enrichment.  A little friendly dinner here, a little bribe there, a little anything that gets a newspaper's hand on even one of those radios capable of listening to encrypted traffic, is a life-saving potion.

You can absolutely guarantee that old school media houses will try.  If some kind of pressure campaign actually succeeds and newspaper and media house people actually acquire the very access being taken away from everyone else, Luzerne County will probably try to keep it all "hush-hush".  After all, some asshole in Buffalo might wind up blogging about it and everyone could just wind up looking like a hypocrite.

Such an outcome would be the stuff of "corruption nightmares".  It would become a government agency colluding with private community entities to increase someone's profits.    And folks, I don't have to remind you that something like that has happened before in Luzerne County.

Well, okay, maybe I can, with just one picture. 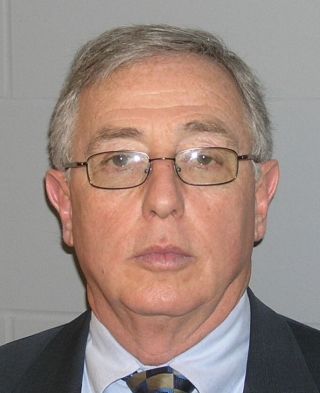 By Dave for for WBRAIL.

Status quo institutions are attempting to kill the hyperlink and relegate you to social media. Resist by sharing this content's hyperlink. To share this content copy the URL below to your clipboard and paste it to the medium of your choice. Never let the world forget about the World Wide Web.

The COPY button may not work in all browsers. If not, rely on clicking on the box and pressing CTRL+A, CTRL+C to get the link into your clipboard (or long-press if you are on mobile device).