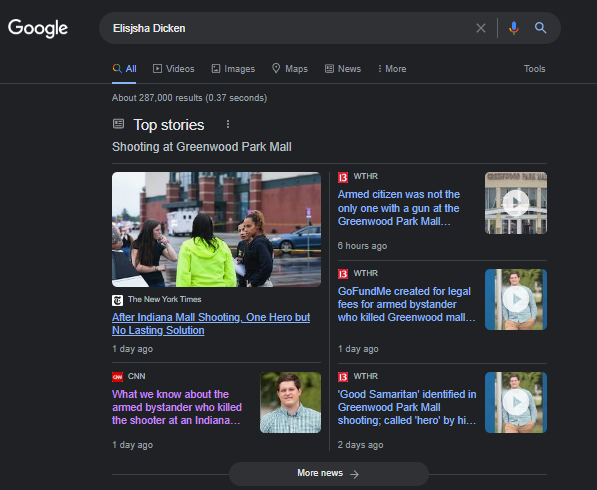 Because of this, examples of good Samaritans like Elisjsha Dicken taking out a mass shooter before he can inflict more carnage do not strengthen the gun advocate's argument.

Innocent people still died and that number of similarly innocent people adds up when multiplied over all the cases of people dying before mass or piecemeal shooters are shot themselves.  Those who advocate for the elimination of gun rights to reduce the circulation of firearms, to reduce shootings, have a better case out of this incident than gun right advocates do in trying to make theirs.  So any narrative to the contrary is pretty ironic.

The reasons are pretty simple:  Mass shooters typically get the drop on everyone with respect to their intent, and some such as the Buffalo Tops shooter, even wear body armor.  A good man with a gun doesn't resolve things like that.  In the Tops shooting a "good man with a gun" was annihilated in seconds thanks to the latter circumstance. He died shooting and said shooting made no difference.

Note I am not taking up sides here, I tend to favor handgun ownership these days, in fact.  But that doesn't mean that I am not bothered by people sipping up instances of drama stupidly making arguments for their cause.  The best and only good argument gun right advocates have is that it appears to be a Constitutional right, so if we care about that, we have to adjust as a society.  People who advocate against the elimination of guns (of which I have no example to provide since just about everyone who argues against guns is really arguing for sensible gun control -- gun 'nutters just "hear" something else in their delusional foaming) would be logically correct that eliminating all guns would obviously frustrate their circulation, and gun deaths and mass shootings would eventually fall to near nil.  A moot point considering that, again, Americans have this right to bear arms.

By Dave for Personal Blog.

Status quo institutions are attempting to kill the hyperlink and relegate you to social media. Resist by sharing this content's hyperlink. To share this content copy the URL below to your clipboard and paste it to the medium of your choice. Never let the world forget about the World Wide Web.

The COPY button may not work in all browsers. If not, rely on clicking on the box and pressing CTRL+A, CTRL+C to get the link into your clipboard (or long-press if you are on mobile device).